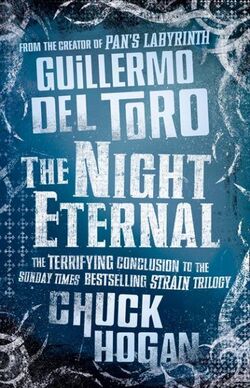 The Night Eternal is the last book in The Strain trilogy and follows The Fall. It was released in 2011 and takes place two years after the vampires, led by the Master, used atomic weapons to establish a nuclear winter.

Two years have passed since the nuclear winter started. The sun is blocked almost continuously and vampires can move freely, except for a two or three hour period when sunlight filters through. The vampires have restructured society as a police state to suit their needs: most strong and influential humans were rounded up and exterminated, those who surrendered and submitted were spared and used in a variety of occupations, leaving only the infirm and the weak, who are herded into concentration camps where they are farmed for their blood.

Despite the hopelessness of their situation, a small group of survivors, including Eph Goodweather and Vasiliy Fet, continue to resist the vampire occupation.