"Dr. Ephraim Goodweather's failure to kill the Master-the ancient vampire behind the epidemic infesting New York City-has led the former alcoholic to relapse as the city burns around him. It's the end of the world, but Eph, beaten but not dead, has still got to protect his son Zack from his mother, who's now a bloodthirsty vampire that craves her child more than any artery. 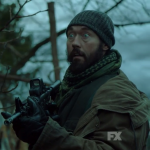