The Strain Wiki
Register
Don't have an account?
Sign In
Advertisement
in: Books, Facts, The Strain, Miscellaneous

The Art of The Strain (book)

Based on Guillermo del Toro and Chuck Hogan’s best-selling book trilogy, The Strain is a high-concept thriller that tells the story of Dr. Ephraim Goodweather (Corey Stoll), the head of the Center for Disease Control Canary Team in New York City. He and his team are called upon to investigate a mysterious viral outbreak with all the hallmarks of an ancient and evil strain of vampirism. As the strain spreads, Eph, his team, and an assembly of everyday New Yorkers battle to control the fate of humanity itself. The Art of The Strain will delve into the amazing design work that went into creating this chilling TV series, including del Toro’s own designs for the menacing beings that pose a threat to humanity’s survival. The book will also feature interviews with key members of the cast and crew and tell the full story of this unique production. Filled with stunning concept art and candid behind-the-scenes imagery, The Art of The Strain will be the perfect accompaniment to this year’s most exciting new television show. 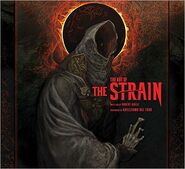 Artwork that does not appear in the book: