The Strain Wiki
Register
Don't have an account?
Sign In
Advertisement
in: Event, Characters, Book Characters,
and 3 more

Trillions of years BC

Heaven (pre-fall)
Earth (as the Ancients/post-fall)

Ozryel was one of the Archangels created by God. Following his demise, he became the progenitor of the Ancients, and thus of the vampire race.

Ozryel was one of the three archangels sent down to Earth by God, to punish Sadum and Amurah (Sodom and Gomorrah). All three angels - Ozryel, Gabriel, and Michael - began their work by taking shelter in a nearby city, to observe their target cities before striking. While being sheltered and washed by the family that had welcomed them, Ozryel became fascinated by their blood, the substance that carried life through their bodies, and thus was a little piece of God's divine power.

Entering Sadum in disguise as a human, Ozryel was called to by a brothel madam, who he attacked and bit on the throat, drinking her blood from her jugular vein.

After Sadum and Amurah were destroyed, Ozryel was overcome with bloodlust and attacked his brother, Michael, drinking his silvery blood as he had drunk the human's. As punishment, God ordered the other Archangels, Gabriel and Raphael, to impale Ozryel to the ground with a beam of divine light, and then cut his body into seven pieces and scatter them across the Earth. Over time, Ozryel's accursed parts seeped into the dirt of the burial sites and spawned the Ancients. His name became anathema and was not mentioned in traditions regarding the fall of those cities:

"The third Archangel is deliberately omitted. Hidden. Lost." (from 'The Night Eternal')

The Master was spawned last, and is thus regarded as the "youngest" of the Ancients. He came from Ozryel's throat, and so personifies the Angel's "thirst" and insatiable ambition more than any of the others.

The manner of Ozryel's death is directly linked to the weaknesses of the Strigoi:

Abraham Setrakian explained that the number of bodily features of Ozryel found in traditional representations corresponded to  the number of souls upon the earth. This is symbolic, in 'The Strain' story-verse, of the boundless contagion contained within the Ancients and unleashed by the Master against all of humanity:

"[Ozryel] has as many eyes and as many tongues as there are men on earth. But you see, that only speaks of how he can multiply, how he can spread…" (from 'The Fall')

Ozryel is also referred to by the Ancients as "Sariel" (with whom they collectively identify) among themselves through their shared consciousness. When the last of the Ancients, the Master, was vanquished, his remnants merged with those of the other Ancients gathered by Quinlan as they had instructed him. Finally released from earthly bonds and reconstituted as a single entity, he was reclaimed by heaven. 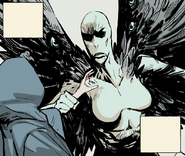