The Occido Lumen (full title Occido Lumen—A complete account of the first rise of the Strigoi and full refutation of all arguments produced against their existence) is a medieval manuscript which Abraham Setrakian believes is the key to defeating the Master. The book's title translates as "The Fallen Light" or even more literally "(I) Kill The Light."

The Occido Lumen is a translation, authored in 1667, by Rabbi Avigdo Levy of Paris, of a collection of Mesopotamian clay tablets discovered in a cave in the Zagros Mountains in 1508. The tablets eventually came into the possession of a silk trader, who traveled with them throughout Europe, before being strangled in his warehouse in Florence, which was then set on fire. The tablets survived, however, and were traded to John Dee, a "necromancer" who was a consultant on magical matters to Elizabeth I. Though he was unable to decipher the tablets, Dee kept them until 1608, when he was forced by poverty to sell them to Levy, a well-known scholar. Three hundred years before other scholars became capable of translating ancient Sumerian, Rabbi Levy taught himself to do so through patient study.

Upon completing the Occido Lumen, Levy presented the text to Louis XIV, who declared the rabbi a heretic and imprisoned him, and ordered his entire collection destroyed, including the original tablets. However, the book survived, in the hands of Mme de Montespan, one of Louis's mistresses, an avid dabbler in the occult. It was later kept safe by Montespan's "sorceress" friend, a midwife named La Voisin, before that lady's implication in the Affaire des Poisons.

After that, the book resurfaced, briefly, as part of the collection of London scholar and reprobate William Beckford. The book disappeared when Beckford's collection was sold to an arms dealer, and was believed destroyed for several centuries, except for being listed (under the mistaken title Casus Lumen) at an auction in Marseilles in 1911, which never took place due to an outbreak of mysterious disease. It finally resurfaced in New York City, for auction at Sotheby's.

Many scholars consider the book a myth, or a hoax, but Setrakian, an accomplished scholar of Eastern European literature and folklore, believes it is genuine, especially since The Ancients, including the Master, all seem to fear it.

Role in the Novels Edit

During the first week of the vampire plague in Manhattan, Setrakian obtains a Sotheby's catalog estimating the book's value as $12-25 million. Setrakian is desperate to obtain it, even knowing that the Master is equally desperate to destroy it, and, with Eldritch Palmer's financial backing, can easily acquire it.

When Palmer asks why the Master doesn't simply blow up the auction house, the Master retorts that several past efforts by the vampires to destroy the book have failed, and the only way to be certain is for him to destroy it with his own hands.

Setrakian turns to the three American Ancients, who agree to finance his participation in the auction, while warning him that any human who views the book must be killed, and, if he wins the book, Setrakian will be allowed to live only long enough to learn what he needs to defeat the Master.

At Sotheby's, Setrakian is nearly outbid by Thomas Eichhorst, but wins the auction when Palmer, vexed at the Master's continued refusal to make him immortal, rescinds Eichhorst's line of credit midway through the bidding. Setrakian takes immediate possession of the book and escapes the auction house, evading an attempt by Eichhorst's vampire minions to steal it.

The book is eventually translated by the combined efforts of Setrakian, Ephraim Goodweather, Vasiliy Fet, and Quinlan, who learn that the Master's point of origin, The Black Site, is one of the Thousand Islands in Lake Ontario, allowing Eph to destroy the Master and eradicate his strain by detonating a nuclear weapon there. The book also contains instructions for assembling the remains of the other Ancients, which, when followed by Quinlan, result in the reconstitution and resurrection of the Archangel Ozryel, who is taken by Heaven at the moment of the Master's death.

After the vampires have been destroyed, Fet devotes his life to publishing Setrakian's research to the rest of the world, including his translation of the Occido Lumen.

The following is a rough translation of the text.

Lamashtu is an old historic figure that left a mark on the body of Lilith. Many curse her the evil daughter of "heaven" or of Anu, and she is often depicted as a terrifying, blood-sucking creature with a lion's head and the body of a donkey. Much like Lilith, Lamashtu above all snatched newborns from their mothers. She was told, to be observant of pregnant women, in particular when they went into labor. [...] the newborn from the mother [...]

[…] of the creature has been found in almost every culture around the world for many centuries. Today we know them mainly as vampires, but in the old ages, the term vampire did not exist. Drinking blood and similar activities were attributed to demons or spirits that would eat flesh and drink blood, even the devil himself had been synonym for the vampire. Almost every nation connected the drinking of blood with some kind of revenant or daemon, that […] of Arabia […] actually Legends could […]

(Image: Battle of Vampires and Angels)

ACCOUNTS OF VAMPIRES HAVE EXISTED FOR MILLENNIA

Today we know them… [same text as above]

[…] victims over the heart or between the eyes and sudden deaths could indicate the presence of a vampire. Graves were […]

English historians of the 12th century […]

Another type of Romanian vampire is Pricolici. These types are humans born with a  stinger, and they can shift like a werewolf, but keep control over their transformation. Their energy is held in their  stingers. Undead, the Pricolici remain in their wolf form.

MEDIEVAL EUROPE AND THE VAMPIRE

Romanian vampires were told to bite their victims over the heart or between the eyes and sudden deaths could indicate the presence of a vampire. [same text as above, looks like they started mid-sentence there]

Romanian vampires [no context] Anyone who had a hideous appearance, was missing a finger, or was dependant […] of an animal was believed to be a vampire. A person that alone [...]

Seal of Haagenti on one of the Occido Lumen page 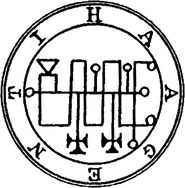 Seal of Haagenti
Add a photo to this gallery
Retrieved from "https://the-strain.fandom.com/wiki/Occido_Lumen?oldid=20809"
Community content is available under CC-BY-SA unless otherwise noted.