The Strain Wiki
Register
Don't have an account?
Sign In
Advertisement
in: Characters, Vampires, Supporting Characters,
and 2 more

Lar is a supporting character and was a Sun Hunter who was the official voice of the Ancients and would often be seen speaking their will and intentions to any who came to consult.

Lar comes into the Ancient's room and says that he speaks for them. Quinlan speaks to the Ancients about the last vampire crew that died. Lar then said that they wanted to know about the status of the Lumen's translation. Quinlan says the information of the Lumen is not done being read yet. Quinlan warns the Ancients not to threaten him since he is their only ally in the war.

In the Ancient's building, Quinlan and Lar are talking about how killing the Master's would kill him completely. Quinlan angrily yells out how Lar could have told him about killing the worm while he points his sword at one of the ancients, while Lar holds him at gunpoint. Quinlan then stands down and tells them that he risks everything including the city as he and Abraham Setrakian left the building.

Meanwhile, Quinlan walks in where the Ancients are. Quinlan warns them about a piece of cargo that The Master ordered. Quinlan then talks about the Egyptians managing to seal an Ancient that was in the crate and tells them that the cargo is the one that the Ancient is in. Quinlan tells Lar that one of the ancients made an alliance with The Master. When Quinlan talks about the "pawnbroker" Lar says that he doesn't trust him. Quinlan said to them that he wishes them a speedy death. Lar tells him to wait and said what was his proposal. Quinlan told him back to get The Ancients off the pedestals to something other than a captive human meal. Lar says that he is ready to listen Quinlan said that he will return later with instructions.

Quinlan arrives where The Ancients are and ask them if they are ready to act to save themselves. Lar said that they are ready. A lot of vampires come in, Lar told Quinlan that he is a traitor but Quinlan said he isn't the one who brought them there. Thomas Eichhorst brings in a briefcase and insults The Born and The Ancients. Thomas arms the briefcase and leaves the briefcase as everyone fights. The vampires were able to overwhelm Lar. But The Ancients are able to fight. Quinlan fights his way through the strigoi and speeds away. 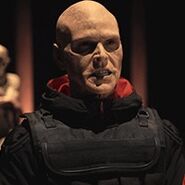